This is a list with the full menu from C'Aphrodite! Whether for a company party, or your birthday, guaranteed freshly prepared. The dishes of C'Aphrodite from Cremorne has a lot to offer you. Is there something you like? Or search for other restaurants with menus in Cremorne. Call +61299535345 for questions or prices and if they are open or not. Been coming here on and off for about the last 15+ years, but not been so often recently. It used to be good with a great Greek family who ran it and served good basic Greek food. Always been a bit pricey as its in the Cremorne Orpheum cinema enclave, but not unexpectedly so. Yesterday, it seemed that there were new people in charge and we were very disappointed in the quality of the food. The mezethes were OK, nice Tzatziki, taramasalata, melitzanosalata with olives and pita. My Kotopita (chicken pie) was very stodgy, tasted almost like potato, seemed to have very little filo top or bottom and looked like a chunk of mass produced stuff that had been cut from a big block and microwaved to make it very hot. It also stuck to the plate. The accompanying Greek salad was good. My partner had Souzoukakia (meatballs in red wine sauce with mash) which also had an unusual flavour, maybe reminiscent of tomato sauce?We did not have coffee or dessert - although the dessert selection in the cabinet including baklava and Greek delight amongst a wide selection did look tempting.The decor is bright and elegant, and the service was pleasant enough, but as there were only about six people in over the hour or so we were dining, there wasn't much for the staff to do.Really wish I could recommend it, but it's not as good as it used to be. Doubt we will return. 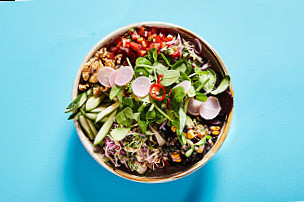 South Of The Wall